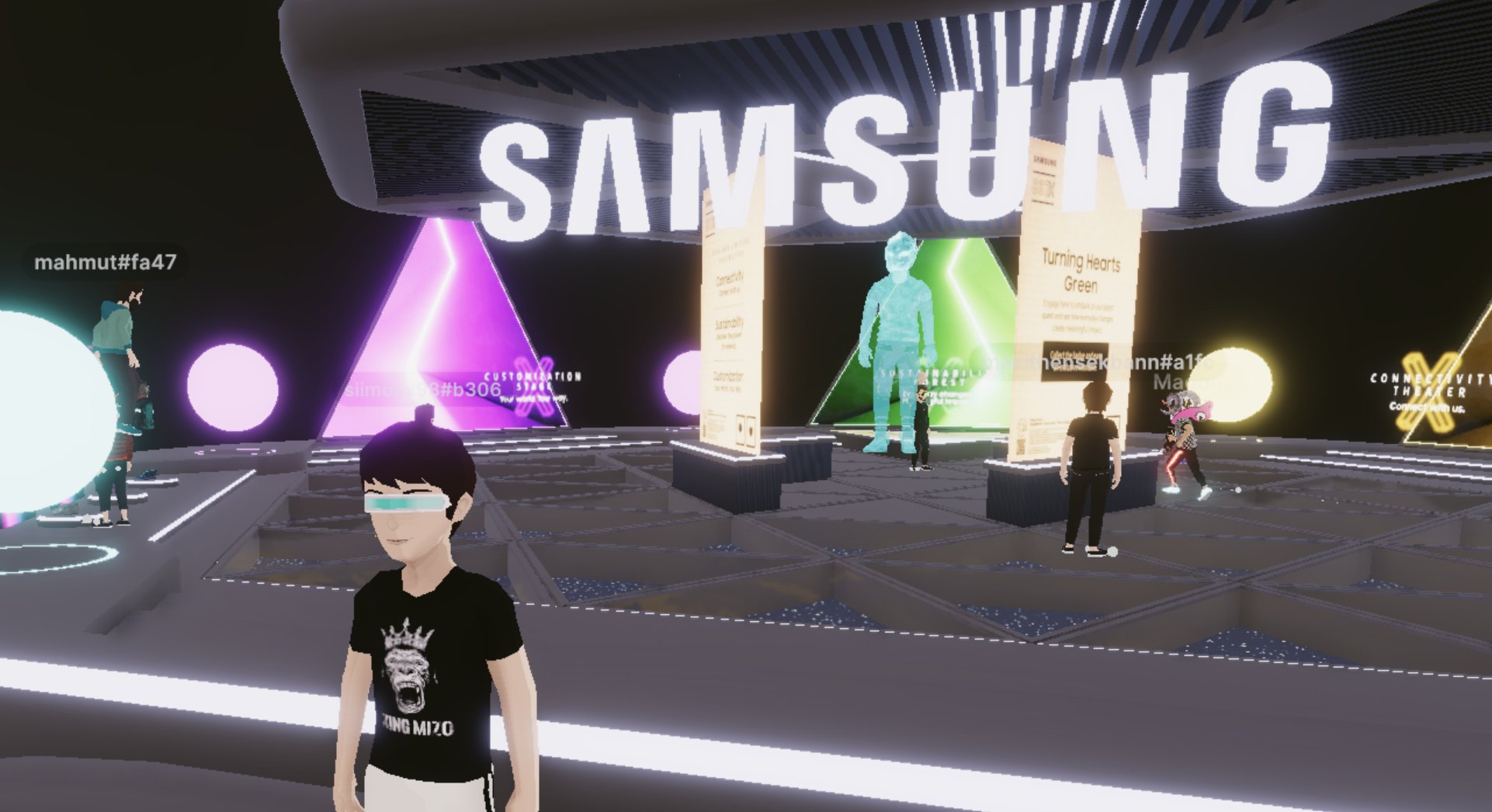 Samsung Metaverse on the Ethereum Based Decentraland, Feb 2022

Samsung, the South Korean based giant with yearly revenue of $200 billion, has created an immersive experience on Decentraland that gamifies exploring their city corner through a mini-game of sorts.

After entering through a portal at Samsung HQ, or Samsung 837X as they call their metaverse, you’re presented with a giant transparent genie of sorts (pictured above) that asks you to find and collect at least five boxes out of ten and bring them back for a promised gift.

And so the journey begins. There’s the theater hall from which they live-streamed their big event, with a box hidden behind the streaming screen.

Finding most of the boxes requires going back in front of the HQ, where a flying car greets you on the side to give you a fun experience of trying to get to the roof, while also seeing the mini-city from above.

Planting the Seeds of a Sustainability Forest

The better part comes when you go back to the genie, who after congratulating you gives you a seed to plant in the forest.

We of course chose to plant it, this mini tree that we were given to carry, in front of the beautiful waterfall where one feels a bit of emotion after much fun of jumping up and down.

The whole thing took us about one hour, with it starting ten minutes in, to explore just what Samsung has built:

For planting that seed we were given a badge, a green heart on a blue background to bring forth the message of turning red hearts green.

This badge does not appear to be a POAP (an NFT based proof of attendance and participation), at least not on the xDAI side-chain that most use, Though it may be on the actual blockchain which can take a bit of time to show up.

We were asked to come back on Valentine’s Day instead to show our love to the forest as the forest might reward us in a potential tactic for continuous engagement. So we’ll get the actual gift in about five days, which presumably is an NFT or a wearable.

As an NFT that would be the very first of its kind by such global giant, and can well be part of history with it all digitally native.

It’s a show on the part of Samsung that they have the skills to engage this potential new frontier, while also making themselves look a bit cooler because it’s a very direct interaction through a 3D medium.

There were nearly 2,000 people on the Samsung city when we went earlier today, with Decentraland able to handle the weight and very well because we had no breakdown connection interruptions or weight load problems.

That’s a notable change from just a couple of months ago when their servers were seemingly falling under their weight. A mini redesign of the menu shows there have been some changes however and the ethereum metaverse can now handle the load.

Samsung is just the latest to travel there. A fashion show is coming next month, with the shopping district under construction and waiting for its debut too.

So making Decentraland very much the prototyping playground for a new 3D medium that can potentially be the new stage or dimension in the evolution of digital tech.