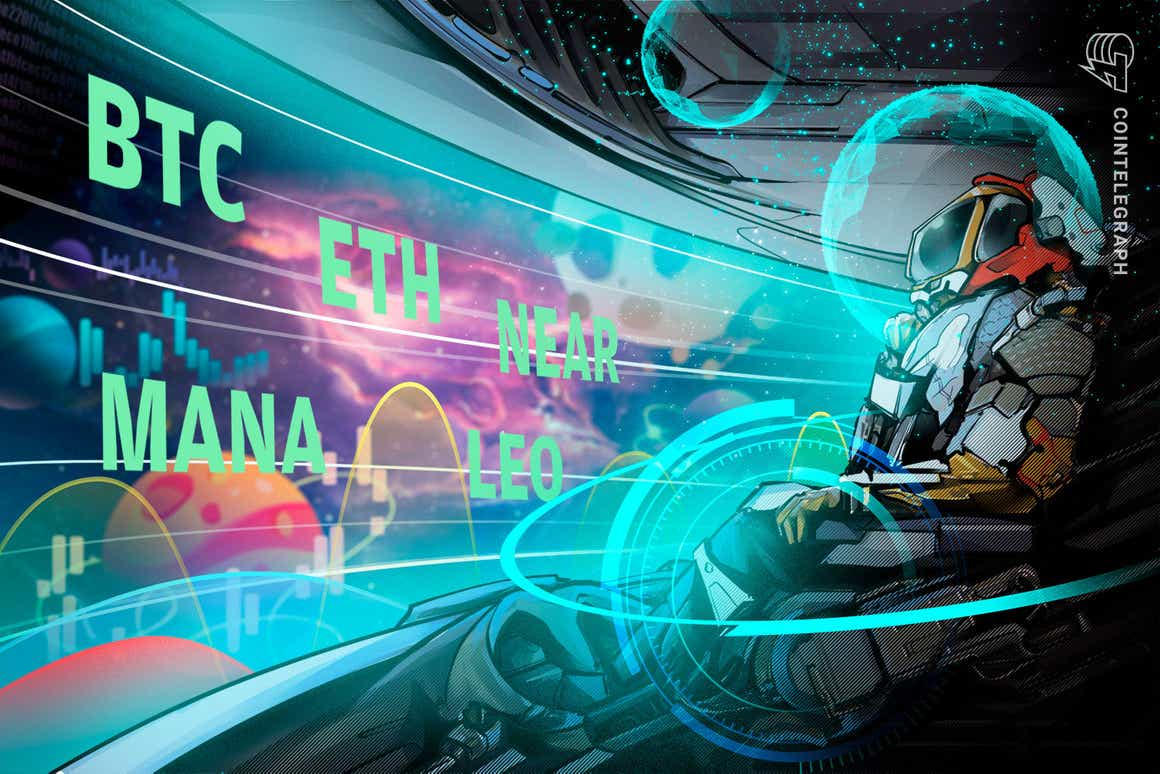 Decentraland MANA Doubles to $3.38 in Less than 2 Weeks

Bitcoin has dragged some altcoins upward in the current bullish trend. MANA has been on a tear for the past 2 weeks trending bullishly on chart patterns. Can it get to a $5.00 price point?? BTC’s attempt to flip $42,000 to support could pull altcoin traders into ETH, NEAR, MANA and LEO. Price Analysis According to CoinGecko

Bitcoin (BTC) surged above the $40,000 psychological resistance on Feb. 4 and successfully held the level over the weekend. This boosted the total crypto market capitalization from $1.78 trillion on Feb. 3 to about $2 trillion on Feb. 6, according to data from CoinGecko.

A new financial disclosure by Senator Ted Cruz shows that he bought the recent dip in Bitcoin on Jan. 25 through River Brokerage. On that day, Bitcoin traded roughly between $35,700 and $37,600. If the Texas Senator has held his purchase, he is already in the profit.

Although the sharp recovery in Bitcoin’s price may have provided relief to the bulls, data analyst Material Scientist warned that large traders with a ticket size of over $100,000 are selling the rally.

Could Bitcoin hold or extend its gains? If that happens, could the altcoins join the party? Let’s study the charts of the top-5 cryptocurrencies that look ready to move to the upside in the short term.

Bitcoin soared and closed above the 20-day exponential moving average (EMA) ($39,600) on Feb. 4, indicating that bulls are attempting a strong comeback. The small range day on Feb. 5 shows that traders who may have purchased at lower levels are in no hurry to book profits yet.

The relative strength index (RSI) has jumped into the positive territory indicating that the momentum favors the bulls. However, it is unlikely to be a straight dash higher for the BTC/USDT pair.

If the price turns down from the overhead zone but does not plummet below $39,600, it will suggest that the level has flipped to support. The bulls will then again try to push the pair above the zone. If they succeed, the next stop could be the 200-day SMA ($49,115).

A break and close above this range will signal the resumption of the uptrend. The pair could then climb to $44,500 where the rally may hit a barrier. On the contrary, if the price turns down and breaks below $40,800, the pair could plunge to the breakout level at $39,320.

Ether (ETH) surged above the 20-day EMA ($2,839) on Feb. 4 and has reached the resistance line of the descending channel. This level has acted as a strong resistance previously, hence the bears may again try to defend it with all their might.

If the price turns down from the zone between the resistance line and the 50-day SMA ($3,256), it will suggest that bears continue to sell at higher levels. The ETH/USDT pair could first drop to the 20-day EMA and then to $2,652.

If the price rebounds off this zone, it will indicate a change in sentiment from sell on rallies to buy on dips. The bulls will then make one more attempt to push the pair above the overhead zone. If that happens a trend change could be in order.

Alternatively, a break below $2,652 will suggest that the pair may continue to trade inside the channel for a few more days.

The 4-hour chart shows the price is rising inside an ascending channel pattern. The 20-EMA and the 50-SMA have turned up and the RSI is in the positive territory, indicating that bulls have the upper hand.

If bulls drive the price above the channel, the momentum could pick up further and the pair may rally to $3,400 where the bears are expected to mount a stiff resistance. Conversely, if the price breaks below the 20-EMA, the pair could plummet to the support line of the channel.

The up-move resumed on Feb. 7 and the bulls are trying to push the price above the 50-day SMA ($14). If they manage to do that, the NEAR/USDT pair could climb to the 50% Fibonacci retracement level at $15.05 and then to the 61.8% retracement level at $16.36. The bears are likely to mount a strong defense in this zone.

Conversely, if the price turns down from the current level, the bears will attempt to pull the pair below the 20-day EMA. If they manage to do that, it will suggest that bears continue to sell on rallies. The pair could then once again drop to $10.

The 4-hour chart shows the formation of a symmetrical triangle, which generally acts as a continuation pattern but, in this case, has functioned as a reversal pattern.

Currently, the recovery is facing stiff resistance at the 200-SMA. If the price rebounds off the 20-EMA, it will suggest that bulls are accumulating on dips. That could improve the prospects of a break above 200-SMA. If that happens, the up-move could reach the pattern target of the setup at $16.36.

This positive view will invalidate in the short term if the price breaks below the 20-EMA. In such a case, the pair could drop and retest the breakout level from the triangle.

Conversely, if the price turns down and breaks below the moving averages, it will indicate that bears are selling aggressively at higher levels. In that case, the pair could retest the strong support at the 200-day SMA ($2.03).

The 4-hour chart shows that both the 20-EMA and the 50-SMA are sloping up and the RSI is in the overbought zone. This indicates that bulls have the upper hand. Any dip from the current level is likely to find support at the moving averages.

On the upside, the buyers may face stiff resistance at $3.40 and later at $4. This positive view will be invalidated if the price turns down from the current level and breaks below the moving averages. The pair could then drop to $2.40.

LEO/USD Breaks Out Of Triangle Bulls in Control

UNUS SED LEO (LEO) completed an ascending triangle pattern when it broke and closed above $3.92 on Feb. 1. The bears tried to pull the price back below the breakout level on Feb. 2 and Feb. 3 but the bulls did not relent.

The buying resumed on Feb. 4 and the price soared to a new all-time high at $5.44. However, the long wick on the day’s candlestick shows profit-booking at higher levels. The pullback has pulled the RSI out of the deeply overbought zone.

Usually, the corrections in an uptrend are short-lived. The long tail on Feb. 7’s candlestick suggests aggressive buying at lower levels. The bulls will now attempt to push the LEO/USD pair above $5.44. If they succeed, the pair could rally toward the pattern target at $5.81 and later to $6.

The 4-hour chart shows the pair is correcting in an uptrend. The bulls successfully defended the 20-EMA and are attempting to push the pair above the psychological level at $5. If they do that, the pair could retest the all-time high at $5.44.

Conversely, if the price turns down from the current level and breaks below the 20-EMA, it will indicate that traders are aggressively booking profits at higher levels. If the price slips below $4.38, the pair could drop to $4.20.

MANA Rips Through Resistance as Investors Push Gains to…